Use this course guide to find and evaluate information and resources related to macroeconomics.

What is a model/theory, and why do economists use them?

Source:  "Episode 5A: Models and Theories" by Dr. Mary J. McGlasson is licensed under a Creative Commons Attribution-NonCommercial-NoDerivs 3.0 Unported License.

The third macroeconomic goal is 'High & Sustained Growth,' but growth of what? This video explains what GDP is, and the expenditure approach to GDP. "(Macro) Episode 20: GDP" by Dr. Mary J. McGlasson is licensed under a Creative Commons Attribution-NonCommercial-NoDerivs 3.0 Unported License.

If an economy is not producing the maximum that it could and there are unemployed resources, the economy's actual output is below its potential output. In terms of Figure 6.18.1 below, the economy is producing inside production possibility frontier I, say at point X. Starting from X, output can be increased by measures that utilise unemployed resources. But even full employment of an economy's resources (as would be the case actually on the production-possibility frontier) does not necessarily mean that the economy will grow. Growth occurs over the long run where the potential full-employment output of the economy increases over time.

Economic growth means that, over time, production possibility frontier I is pushed outwards to II and III. Increases in the productive capacity in the economy over time are usually measured by calculating the rate of change of real GNP per head of the population. 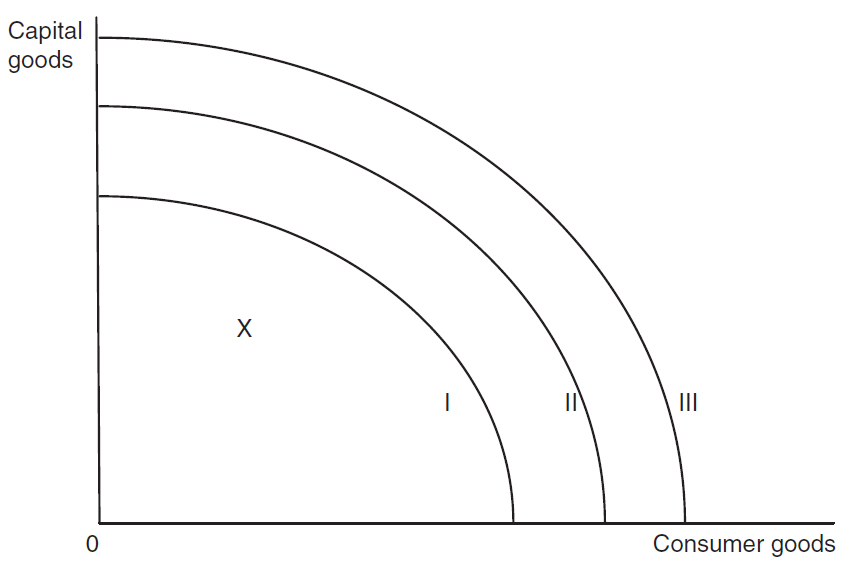