Use this guide to find and evaluate information and resources related to Middle East complexities.  Resources on this guide will help you understand and analyze the often conflicting cultural, religious, political, and historical forces at work in the Mid 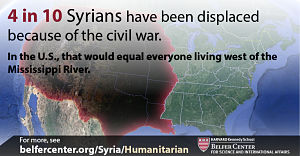 Protests in Syria against the repressive regime of president Bashar al-Assad in early 2011 led to brutal government crackdowns. The conflict has escalated into a bitter civil war in which, according to the United Nations, over 100,000 people have been killed and millions displaced. Use the resources on this page to learn more about this deadly conflict.

Destruction of Cultural Sites and Preservation

A number of Twitter hashtags offer up-to-date information and images regarding the Syrian conflict. (Note: Some of the images may be disturbing.)

Hashtags to click on include:  #Syria, #Assad,  as well as #Aleppo,  #Homs, and  #Damascus (cities in Syria; Damascus is the capital).